STC - Schaff Trend Cycle was created by Doug Schaff. STC combines the advantages of trend-following indicators, cyclic and counter-trend oscillators into one single indicator. Schaff Trend Cycle is not based on Close price (as is the case with other indicators) but its calculation is based on another indicator values. So the technical trader can get Buy and Sell signals excluding many false whipsaws. Moreover STC generates signals soon enough, even before the trend changes. That is the reason why it is considered being one of the best technical analysis indicators ever.

Doug Schaff has revealed the secret of STC construction in February 2008. It combines two of the most popular indicators: MACD and Stochastic oscillator. Schaff has realized that MACD is a strong trend-following indicator. It gives us reliable signals about dominant trend on the market and also generates minimum whipsaws. On the other side it is also considered to be a lagging indicator, because the signals come a bit later (the moving averages themselves are a bit late and MACD calculation is based on them). Stochastic oscillator, on the contrary, is known as counter-trend indicator and generates trading signals much sooner. While Stochastic indicates the market (or cycle) tops or bottoms earlier than the MACD does, it also applies that many of those signals are false. That can lead to many trading losses - so the question is how to eliminate them. It seems that Doug Schaff has found the answer.

STC combines these two indicators into a single one. It gives us signals that are clear (without many whipsaws) but most important - signals that come soon enough (even before the trend changes). Combining these advantages into one single indicator is the reason why STC is so popular on fast, dynamic markets like Forex is and why STC also ranks among the leading indicators.

To explain the calculation in one sentence – we have just calculated the Stochastic over Stochastic over MACD. In step no. 6 we have got the final Schaff Trend Cycle values. The values move in the interval from 0 to 100 points. In the picture below you can see that the moves of the indicator are really very smooth, compared to other technical oscillators (CCI, IMI, RSI or even TSI).

In this example STC indicator has been set to 15 and 80 (short and long exponential moving average), 10 (days for %K calculation) and 3 (days for %K smoothing).

3. Very nice signals can also be generated by STC crossings with any chosen Moving average (e.g. ZLEMA, KAMA, TEMA, Hull MA etc.). As for the Forex market, the STC is often combined with its 10-day moving average as the signal line.

Many popular websites gives the information that STC oscillator is much better and much faster than the MACD is. Well, if you think about its construction more, you will find out that STC is based on MACD so the signals are very similar. The main advantage of STC is that it produces signals that are much cleaner – signals you probably would not realize using just the MACD indicator itself. To prove that - have a look at the picture below. 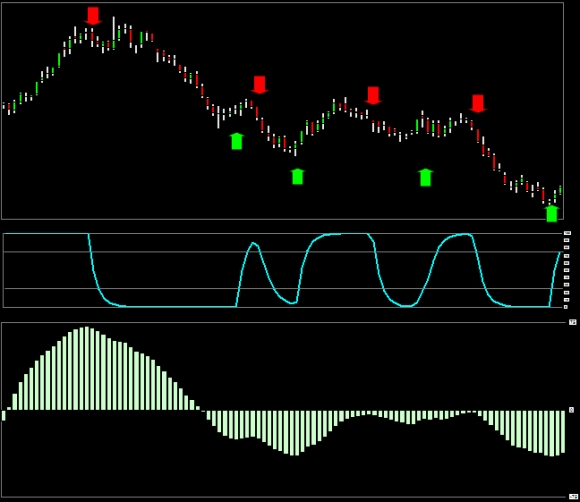 As you can see – setting the STC with basic MACD values leads to more signals that are even sooner. That is caused by shorter moving averages (12/26 instead of 15/80) used in this example. The shorter moving averages used for the calculation – the more and sooner signals we get. STC gives us many options for setting it. Great results can be achieved by asymmetric settings, using EMA signal line etc. It's up to every trader how he adapts the indicator and which of the signals he takes into consideration. Almost anyone who has enough time and imagination, can adjust the Schaff trend cycle indicator in such a way, that it can generate much better results than any other conventional (broadly known) technical indicator.

As with all of the technical indicators the best thing every trader can do, is to test his own data, his own settings, and his own rules for trading. Surprisingly, sometimes the best result can be achieved with unusual settings and rules that are quite strange at a first glance – the more things a trader can change and experiment with the better for him and his trading strategy. If you are interested in a deeper study of this technical indicator, this section may be of interest to you. There you can find all available indicators in Excel files for download.
< Prev Next >