Aroon Indicator was developed by Tushar Chande in 1995. It belongs to trend indicators of technical analysis so its main task is to identify the prevailing trend on the market and the likelihood of change in trend. Alike another popular trend indicators - ADX or RWI it consists of two smaller sub-indicators - Aroon Up and Aroon Down. Aroon Up measures the strength of an uptrend while Aroon Down measures the strength of a downtrend.

The formula for Aroon indicator calculation looks like follows:

If you think about the formula a bit more you would find out that the technical indicator is similar to Donchian channel or moving averages. It takes into consideration the chosen number of days and looks for the Highest Close and Lowest Close within the range. When the most current trading day ends, this current Close price enters into the calculation and the oldest one is left out of it. As long as the Highest Close is falling down the Aroon Up indicator (which measures the strength of an Uptrend) equals to zero (because the market is not able to reach any higher Close price). The same can be said about the Lowest Close. As long as it is rising up the Aroon Down indicator (which measures the strength of a Downtrend) equals to zero. The market is not able to reach any lower Close price and that indicates the presence of strong Bulls and their buying capital pushing the prices of underlying asset upwards.
The Aroon indicator values (both: Aroon Up and Aroon Down) move between 0 and 100. The values near 100 indicate a very strong trend, while values near 0 indicate an absence of a trend). Should the Aroon Up value be 100 points (no matter whether we are talking about points or percents) it would mean that the underlying asset price has just reached new Highest Close price. The same stands for Aroon Down. Should it reached 100 percents it would mean that the new Lowest Close price has been just recorded.
The following values (once the 100 percents level has been reached) are then reduced by a relevant percentage – according to the fact how many days have passed since the Highest or Lowest Close price had been recorded. Every following day when a new Highest or Lowest price is not reached, the Aroon indicator is reduced by these percentages:
Aroon indicator decrease = (1/n) * 100

Let’s suppose that a new Highest Close has been reached and at the same time that is has been 4 days since the Lowest Close has been recorded. According to the explanation above, the Aroon Up indicator would be 100 percents. The Aroon down indicator would be 60 percents [4 days * (1/10) * 100]. Compared to ADX we can say that ADX measures the strength of the current trend based on everyday gains and losses of price Highs and Lows while Aroon shows the strength of the prevailing trend based on the number of days since the previous maximum and minimum values have been reached. 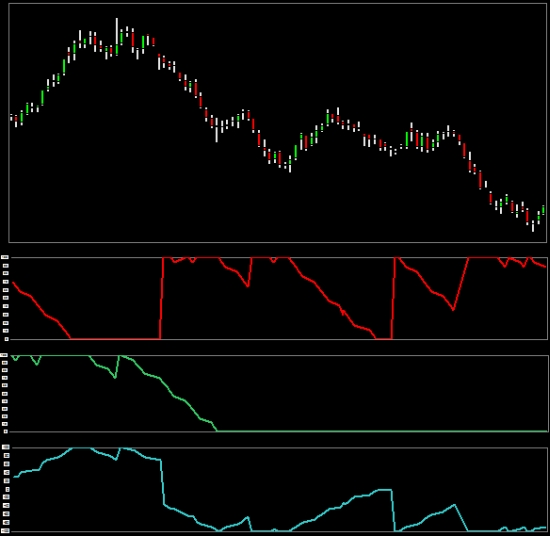 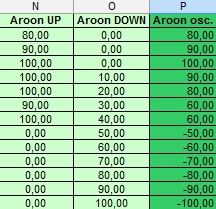 It is commonly written in many articles that the Aroon oscillator values around 0 indicate an absence of a trend and that market can not create any Highest Close or Lowest Close. That is just half of the truth. Values around 0 can also indicate high Aroon Up and high Aroon Down values (that means both trends are strong enough). The high values can cancel each other and the oscillator shows us that despite the strong Uptrend and Downtrend neither of them dominates (see the image below).

How to use the Aroon indicator for trading:

As with all of the technical analysis indicators the best thing every trader can do is to test his own data, his own settings, and his own rules how to trade. Surprisingly, sometimes the best result can be achieved with settings that are not common and rules that are quite strange at a first glance – the more things a trader can change and experiment with the better for him and his trading results.